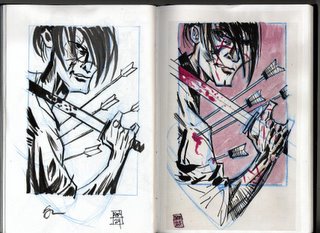 I didn’t mention that the arrows make a connection between Manji and Saint Sebastian because after reading “Blade of the Immortal” I felt there was a lot of suffering and sacrifice that Manji does as penance for his earlier actions.
In any event, these are my quick ink sketches. I have yet to use any reference other that what I did to get the basic pose.
Next I will post the underdrawing which is much more referenced.
Posted by Stan Shaw at 4:38 PM 1 comment:

"Blade of the Immortal" pin-up illustration

My wife thought I’d be drawing scantily clad ladies when I mentioned I was doing a pin-up. Previously, I did this one for “Super Real” a comic book by Jason Martin. 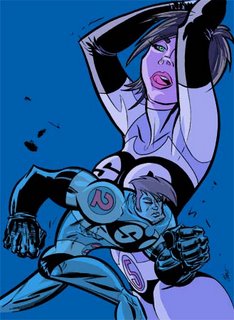 These are my first steps to a pin-up for the manga, “Blade of The Immortal” by Hiroaki Samura and published by Dark Horse. Philip Simone, the editor, said I could do whatever I wanted. Hmmm… After reading a stack of the manga reprints I chose to go with the main character, Manji. Snatched up some samurai and Toshiro Mifune images and was off to the drawing board. 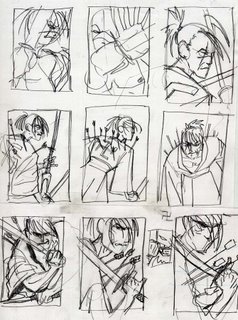 I liked the idea of Manji with arrows sticking out of him, like Saint Sebastian. However my initial roughs lacked the intensity I wanted. So, an angle change, tighter cropping and three roughs later, I had what I wanted. 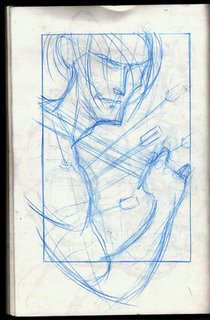 I tried redrawing (always tricky) the rough to scale in my sketchbook but it missed the flow of the rough. 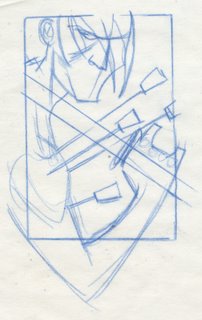 So I used my scale-o-graph to crop the rough to the correct scale and traced over it. From here, I will get needed photo reference and do a tighhter pencil sketch. However as a side step, before I get reference, I’ll pencil and ink the new rough to get a clear idea of where I want this illustration to go. All the while seeing how fast I can do this.
Posted by Stan Shaw at 11:14 PM No comments: