Earlier this year I worked on a project  doing fitness/exercise illustrations, 21 episodes with at least three images per episode,  for, "Help Yourself in 5 with Bob Harper, sponsored by Planters Nutrition", a site Bob Harper (The Biggest Loser) has on MSN. I was called in at the start of the development phase because of my visual problem solving skills. This was exciting because both my wife and I are gym rats so I would have no problem understanding any of the exercises or finding models! Well that and I was getting paid!
Microsoft's Branded Entertainment Experience Team had sent me a lot of art with the flavor they wanted. They had a rough look for the site and wanted to add illustrations  that were subtle, tasteful with a little flair. In the beginning we were thinking of bright colors and textures. We wanted an almost retro, 50's look to it. Think Jack Lalanne! 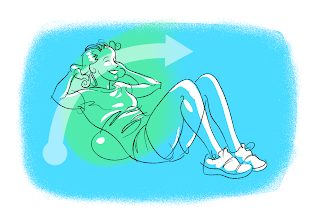 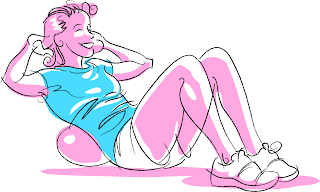 I started in on stye tests, working in Illustrator CS because vector art was needed since this was to be used online and on mobile applications.  The first style tests were too light in line weight and to detailed to really work online and definitely on mobile apps. So, we went to a thicker line with simpler filled areas.  See, I have this thing for actually naming illustrations so we had Betty, Veronica, Kate and Lucy to chose from. In the third real style test (I did a ton before sending any to BEET) we felt "Veronica" was the best. However to use color in the arrow and spot that shows what area is benefitting, (sometime overlapping the figure and working in 3-D,)  I made the figure only black and white. Real old school! The spot and arrow colors would be equally old school, faded colors. I felt that an arrow that moved in and around the figure would better show the movement called for in the exercise.
The art director, project manager and head writer felt we had nailed the style so I got the scripts and started on the final illustrations.

I created a brush and set up a format in Illustrator so that all the line weights and scaling would be the same for all roughly 63 drawings. I pulled together my reference, took photos and made changes. Somethings were not safe and some postures weren't straight so I corrected them, just like yer old gym teacher! My sketches were done in Sketchbook Pro and fired off to BEET for approval. From there I finished each one "inking" them in Illustrator, saving out two versions for web and mobile.
"Ironing Man" (using a clothes iron to do bicep curls) made sneaky appearances before the project went live.
I don't spend ALL of my life in front of a computer and I just got word that the site is live on MSN a couple of days ago. Stop by take a look at all the workouts, and let me know what you think. Do an exercise or two and waste five minutes getting fit, and remember it was drawn by some guys sitting on his butt.
Posted by Stan Shaw at 2:12 PM 2 comments: