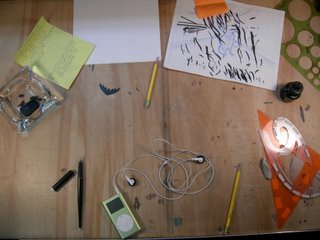 Since before the time of Rockwell the camera has been a tentative partner and tool to the illustrator. This Christmas my wife and I bought a digital camera. Not that we have never had a camera before, but film was to involved for us. Ho the digital camera! Shoot it, love it, keep it. Shoot it, hate it, delete it! This is my drawing table top, uncovered and set up for inking. I write most of what I need to do on half size yellow pads, yes I love the Rotring sketch pens and Ticonderoga pencils.
The blue line drawing in the right is a copy of what I was inking. I currently listen to my iPod while drawing since my radio done gone busted.
The batarang is from the Limited Edition Batman Action figure that stands next to it’s Superman counterpart and a Green Lantern action Figure (Hal Jordan) and a Bob’s Big Boy.
This is just a rough description of the area used for conventional art that I call the cockpit.
Posted by Stan Shaw at 6:12 PM 1 comment: 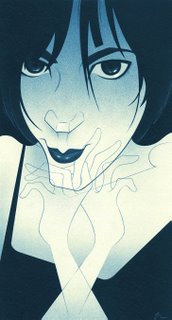 There are a lot of times that, when the illustration is finished, you look at it and think of the things you should have done, could have done and wonder, “Did I do the right thing?” Even when you feel you have, there can be a bit of second guessing. Most artists and illustrators that are, in my opinion, critical of their own work and REALLY take stock of what they are doing, go through these feelings.

This illustration of Beth Orton was for No Depression Magazine. After some research, the concept for the illustration , done in my favorite limited color airbrush style, sprang almost fully formed into my head. The only part I wasn’t sure about was the hands, so I sketched them as a quick overlay on tracing paper. When I saw the hands as outlines over the face, ghostlike, there but not there, I though that was a nice way to show how Orton is somewhat shy, but still opinionated, strong and putting her powerful music in front of a lot of people.

So there it was, the dark dress, the close crop, pale skin with dark eyes. Somewhat mysterious, sexy with wispy ghostlike hands! Cool.
I finished the illustration without a hitch, adding the delicate line work being very careful to not do what I normally do and get heavy.

When I was done, my wife commented that I had lost some ethereal elegant quality that was in the sketch. This is always a a worry in illustration. I That in planning and preparing each stage, some spontaneous, wonderful element will be lost going from one step to the next.
I did some slight reworking to the final after a long bought of soul searching. 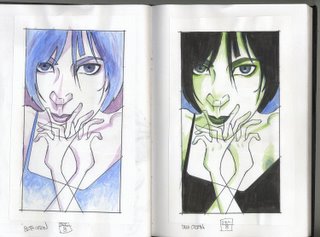 Then on good advice, I made two copies of the sketch and finished each differently, keeping in mind the felling and concept that drove the illustration in the first place. The result? Some not bad work, two pages done in my sketchbook, possible alternatives in style, and a glimpse at illustration alternatives that may come fully to life in another illustration.
Posted by Stan Shaw at 6:01 PM 1 comment: