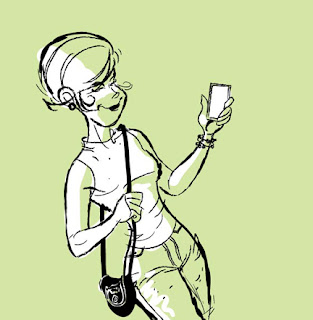 For a while now I've been doing a lot of presentation and proprietary storyboard work. Odd stuff, interesting stuff, speculative in nature, and not always finished. These are bits of the second of a two part project. The nature of the assignment called for finished vector work in three distinct styles. This is the one I had the most fun with. It is reminiscent of old Reader's Digest illustrations in it's rough line and single tone color treatment. I created a few special brushes to work with in Illustrator CS4. (I've since moved on to CS5!) I wanted the style to look rough and coarse as if done on oatmeal paper. We all remember paper, right? 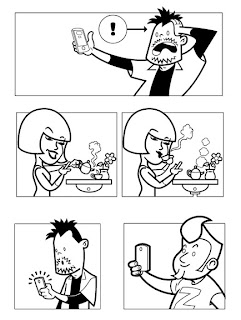 The other snippets are from the other set of storyboards. The style was to be more tech, clear line, and cartoony. We wanted a contrast between the rougher line and the cleaner line. Also contrast in how the overall feel, mood and flow of the boards.
They both were fun to do and took advantage of different features in Illustrator. I wish there would have been time to add color to these, in the vein of "Near Art". We had a bit more time at the start, but the schedule got cramped and one of the designers left half way through the project, so in the end we only completed two of the three.
Anyway the dust has settled on these boards, so it safe to tread.
"Live fast, draw hard."
Posted by Stan Shaw at 10:45 AM No comments: