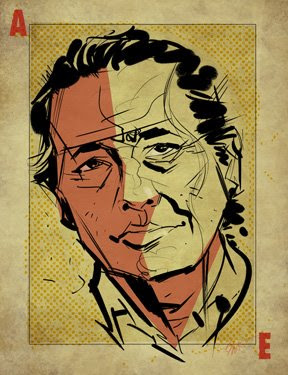 Well, after two remodeled houses, a rough Holiday season, a much needed vacation and a glut of work I'm back to posting.
This is an illustration of Alejandro Escavedo. It's my final piece for No Depression magazine. They closed up shop this month, the last issue. I've known the editor, Grant Alden for years. Just about since the beginning of my career. This illustration is, in many ways, much or more about him and the magazine we met on, The Rocket.
The textures of the illo for me hark back to our Rocket days and the over all treatment, I hope, evokes some of the Seattle punk rock era. Pre-Grunge, mind you.
The overall treatment speaks to what I was doing then, not only for Grant at the Rocket, but alongside him. He started type setting then moved to writing and editing. Whenever I stopped by "The Rocket Towers", I would hang with him and whomever was art director or assistant art director. Later, Grant, as Managing Editor, would ask me to create a comic strip ("Alan Bland, Guerrilla Artist")for the Rocket.
If memory serves, he also had me do one of my first illustrations for the Rocket of Camper Van Beethoven. Years later, as editor/art director of No Depression, he asked me to create a six page comic for Camper Van Beethoven's reunion album. Grant is also an illustrator of no small skill. (He's an all-a-rounder, a triple threat!) His eye for illustration, design and type (whew!) made working with him, or just being asked to work with him a joy and an honor. I have done some of my best work for No Depression. I will always look forward to working with him.
Posted by Stan Shaw at 6:25 PM No comments: