Near Art Part One 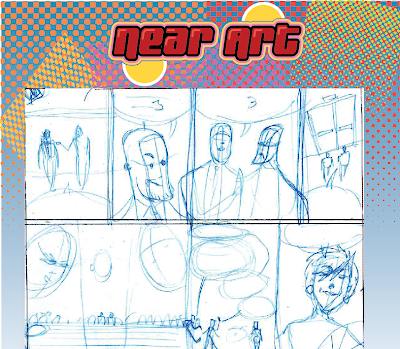 Whew, the first part of my comic novella is out the door! What a long process it's been. A lot of tweaking, fine tuning, editing, course changing and grumbling from me as I had to be smart and give up on some inside jokes and plot elements that would only make any kind of sense to me. What remains is a better story with a clear plot that gets up and running in no time at all! Twelve pages is not that much to tell a long form story and to keep interest over a month between each is a lot to ask. I've done short comic stories ranging from 5 to 11 pages, and read at once it's a good read.
Page count and time aside my goal from the start was to do something different, hence a pop love story, confection, eye candy. 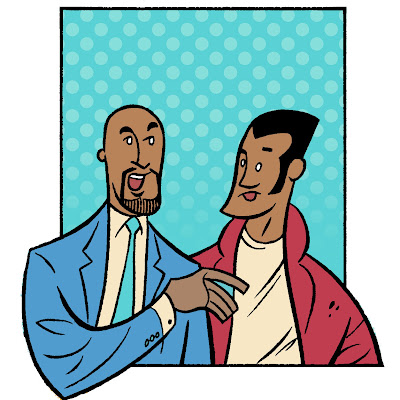 Of course I can never leave thing alone so I had to keep dumping in a lot of stuff and the whole thing took on a love story ala Philip K. Dick tone. Which would be nice if, again, I had the space and pages to set things up. We, the editor and I, had hoped to do a strip within a strip, a twist on reality, a mobius strip. See, it even takes a while to set up a bad pun about it! 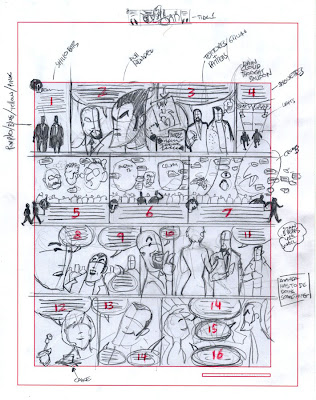 I started by coming up with my (half baked) idea, then doing thumbnails. Visually driven, I wound up falling in love (no, no pun intended) with some ideas.
Bad cartoonist, no credit line! 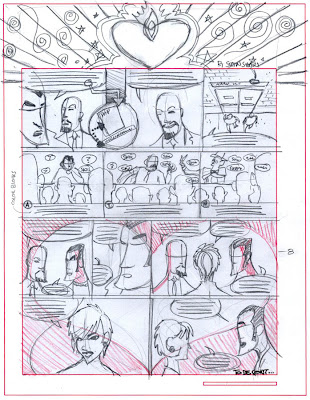 Since this is the launch, I don't want to spoil it by giving too much away. The magazine described it as semi-autobiographical. I like to think of what the writer Denny Eichorn once told me. I had been illustration a few of his auto-bio comic stories and I asked him if they were true, he replied, "Well, they're true enough."
Posted by Stan Shaw at 1:39 PM No comments: 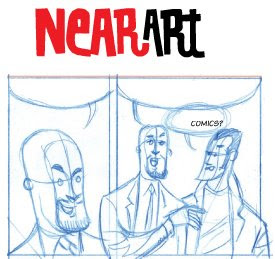 My new comic is under way! City Arts magazine was so happy with the response to "The Flitcraft Parable" and the way it turned out that they asked me shortly after it was finished if I'd be interested in doing a 12 part story. They are increasing publication to go monthly and cover Seattle and Bellevue/Eastside as well as Tacoma. Who could resist. Cartoonist accepts offer, comedy ensues!
My first idea was to do another detective strip like Flitcraft, but a good friend of mine said,"You've done two, people know you for tat. You do another and you'll be BRANDED!" So I went the other way, and after months of working on ideas I finally came up with a romance story. Ahh, sweet love!
Of course that was just the start. Initially it was to be a sort of romance ala Philip K. Dick story, with a somewhat circular plot mimicking song structure (say wha!?)
Yeah, well, that was a thought. So over the course of developing the story characters disappeared, merged, split,grew and shrunk. I also fell into the trap of desperately holding onto bits of dialog. So back and forth with the editor, me, and my "In-House-Art Director", till me likkle head was in a whirl! But now the characters are set, all 12 parts outlined, the first strip is written and on the drawing board.
The title is "Near Art", which oddly enough is part of a line of dialog that was pried from my cold dead hands (how to really mangle a metaphor!). It was used as sort of a joke placeholder and has really taken on a greater value and added more meaning to the strip.
So this is the first bit. I plan to post more "Near Art" art in the future.
Posted by Stan Shaw at 12:25 PM No comments: