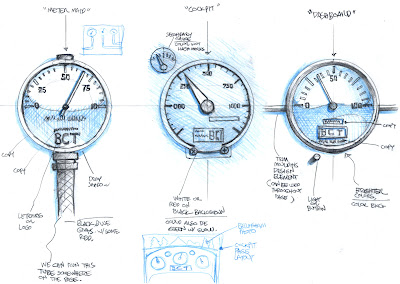 Today was a good day. I got to sit at my Big Boy drawing table and draw these! Theses are sketches for a web icon, actually more like an animated widget, that I will complete as vector art. Three versions here, with all my little scribbly notes to the designer. Rough work has it's own appeal that the final doesn't.
"live fast, draw hard."
Posted by Stan Shaw at 5:01 PM No comments: 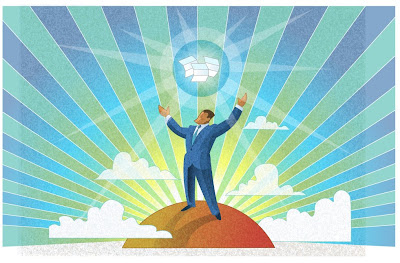 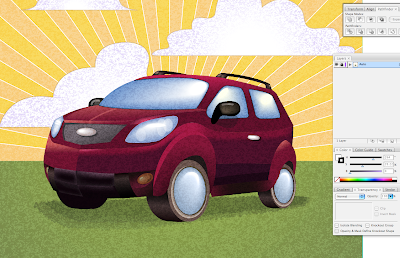 Things have been busy here. Two houses to work on and one to paint, playing with my new 3000 psi pressure washer!
Meanwhile over at my blog… Right now I'm working on a series of bank illustrations.
Yes me doing illustrations for a financial institution. There are six total. Originally the client wanted to match a painted style with something they would initially use on their new website and possibly later for print/collateral uses. I knew that vector art would work well for web use, and allow for scalability, but how to match, or get close to a painted look/feel for print? Texture and lots of it! I have been slowly building a folder of custom patterns and textures to use in P-shop and Sillly-strator. The one I'm using in this series is something worked up from a scan of one of my airbrush illustrations. I used it like an old stacked screen. (Anyone out there remember those? Buller, Buller…?) the texture is on two layers, one set to normal at about 40 opacity and the other set to multiply at about 20 opacity. And like a stacked screen they're angled to offset. This way the texture builds up a more random look and works over the entire value scale. The shapes are very simple, that's more in keeping with what the client wanted stylistically, but each shape may have the fill and stroke set to different opacities. All in all, the Transparency palette and I are quite friendly now.

The illustrations will be used very small and have the potential to be very big, so I wanted to give the client art that would work at both ends of the scale. Conceptually it's a cake walk, but technically?… there's where the work is. 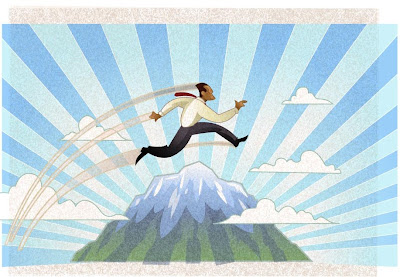 I also decided to have a common background and cloud motif for all the illustrations. Their previous set did not have much in common at all. I was going to have the background be the same color in all, but the designer thought that might be too repetitive. We'll see how the shape up on the website. Even though I have a Wacom all this was mostly mouse work. Parlor tricks! The"In-House-Art Director" really likes these illustrations and says so whenever she passes by my computer, and the client is happy. Well, and so am I. More so with all the technical stuff I was able to do and how I played with texture and transparency.
Posted by Stan Shaw at 12:01 PM No comments: