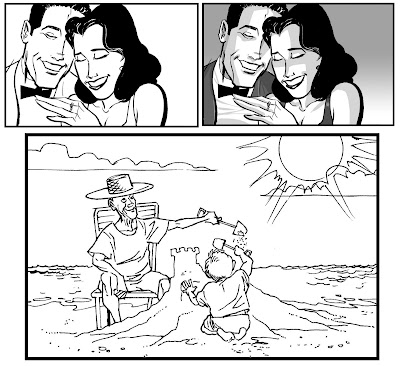 The illustrator and teacher Cherry Brown, who along with her husband Dick Brown founded The School of Visual Concepts, once told me to draw something every day.

Storyboards are the wind sprints of illustration. Short, quick, you do a lot and they can be very tiring. However at the end you definitely on. Even though they might not be the best drawing you'll ever do, a little bit of careful attention to each one can have great results for your skills in the end.
Posted by Stan Shaw at 10:47 PM No comments: 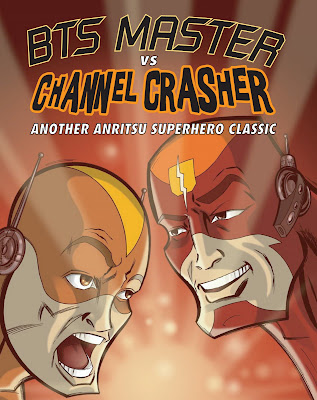 Well now, where I…
This comic was done as a direct mail advertising piece. I've done ad comics in the past (at least two for Microsoft!) and most often they are on the safe side, given what they have to do and the toes that must be avoided. This was born of an ad, the art for which was also used as the cover (shown above). At the time of doing the ad the heroes had no specific relationship, one was just telling the other something about the product, the BTS Master, a device that tests and analyzes cell phone tower transmissions. The characters were done with more attention to the expressions that anything else.
Later it was decided to do more with the comic theme. Originally, the project was a four panel newspaper format comic strip. I was pushing for a two-tiered "Star Hawks" format. That would have been fun. I had convinced the marketing/creative director to let me write it since it was short and I know the format so well. Just then, the project changed. For a reason I can't remember, they decided to make it a five page mailer, and the four panel strip became a five page story! I convinced them to let me flesh out the story without adding to it. I was writing, lettering, coloring and drawing a four panel story in five pages of space! 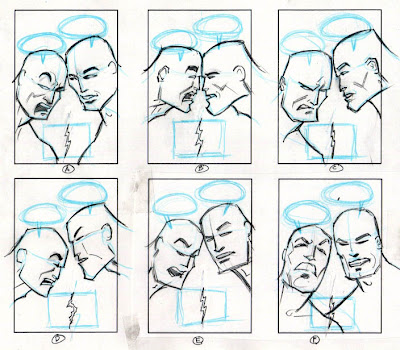 The cover art was essentially done (see my roughs above, done for the ad illustration). I added title lettering under the helpful eye of The In House Art Director. Then I began the pages.
The story was pretty simple, monster/villain wrecks tower, female lead calls in heroes, they show up and save the day using product X,( hilarity ensues, roll credits). But with the extra space I could really set a nice pace, and have it not feel like an ad. 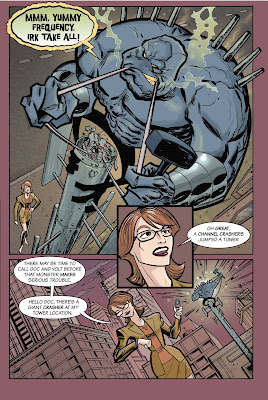 In page one, top panel we see the monster, Irk, because he's irksome, chomping on a cell tower. I did my research on cell towers believe me! In drawing Irk I kept thinking of the monster in "Nightmare at 20,000 Feet", part monster and part gremlin. A corner-of-the-eye thing, well not so much in the end! He has cooling rods in his back (ouch!) a hammer, which shows he does damage, and feet that allow him to grip and scamper up towers. At the bottom we see Vicki, the female lead. I wanted to have a character that would interest the readers (mostly male, tech, engineer types) and act as a counter to the main hero. I based Vicki on Tina Fey, Geek sex symbol. In the bottom panels she observes Irk and calmly calls in our heroes. A color note; the action starts at night and ends at sunrise. As we all know, monsters and gremlins (and freaks) come out at night. The change in light sets a definite time period and pace for the action. Also, this allowed me to do some subtle color stuff. 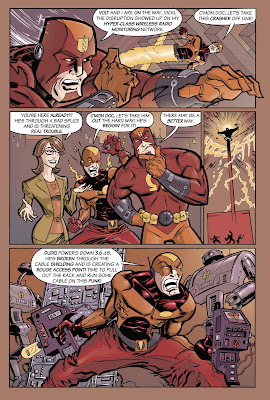 Page two introduces our heroes, Doc and his sidekick Volt, and sets up their characters. This would not have been possible without the extra pages/space. This page is a complete luxury. The only essential panel is panel one, which shows the heroes flying in. About the dialog; I read up a bit on the actual technical jargon and from there created super-jargon and tech-speak for Doc and Volt. So, somehow, what they are saying should really make sense. Vicki's dialog reflects the real problems the product is designed to test and solve. In panel two I show Doc as being the cool thoughtful hero while Volt, my favorite, is the hot head, giving off electricity. His dialog is more aggressive. Their costumes riff on the difference between Silver Age heroes and Image era heroes. Doc echos Space Ghost if you look hard. Panel four has more reality than it appears. Volts dialog, the machines in his hands and the rack unit behind him were heavily referenced, and reflect what may really be done and used in a similar situation. Well I mean not if you had a monster on a a tower but just a problem with the tower. The color palette is pretty limited and I feel I did a decent job of restraining myself to a tasteful level. I tried to create a sense of light from a definite source and color. 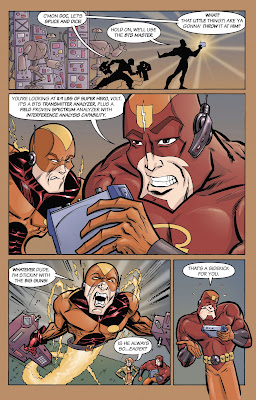 Page three starts with an unusual beauty shot of the product and our heroes, and goes into a harder ad pitch. All this followed by Volt blasting off to take care of things the old fashioned way! Which is what the product offers a streamlined alternative to. Panels three and four are just a little humor that I thought alleviated the hard sell of the piece and added a bit to the characterization while keeping the story moving right along. Doc is drawn an bit more cartoonish and breaks the panel border to add to the effect. It also lets the reader in by breaking the Fourth Wall. 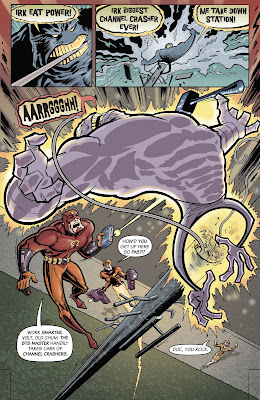 Page Four takes two panels to develop Irk. He's just a simple, hungry monster with a desire to be his best. Even though Volt took off first in Page Three, Doc is first up and everyone takes note of how well Doc handles the situation using the product. I'm not all that happy with the color on this page. I think the light coming from Irk being zapped should have been the main/stronger light source for everything on the page. I remember struggling with the colors in Irk. In hindsight it seems pretty clear what to do. The grass and concrete texture are made from using a scan of one of my airbrushed illustrations. 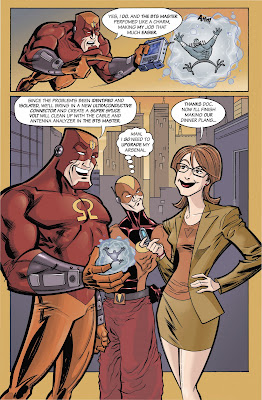 Page Five has Doc take a little credit, basking in his superior intellect and promoting the BTS Master even more. You can tell now the sun is rising by the colors in the background. Irk is now more of a cute lil' gremlin. pointing to the happy light-hearted ending. The last panel has dialog the explains what would actually happen, the limits of the product, after it's use. Vicki's dialog shows her relationship with Doc, and Volt's is a double entendré. Both of which I thought would get cut, but didn't.
Clients who use comics often get excited about having a comic book created for them, and about their product. Issues arise when the story and art wind up being less than what is hoped for. This is usually solved when objectives for the comic are made clear up front, and competent, experienced creatives are left to come up with a solid comic book. This client needed a comic that introduced the BTS Master in a fun, quick non technical way, to a comic savvy audience.
In the end everyone was happy.
Posted by Stan Shaw at 9:45 PM No comments: