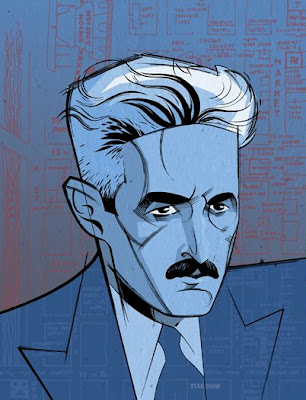 Well it's comic book time kids! We'll start with a project I was incredibly happy to do and proud to say it's not too shabby. There are things I'd do differently, but that's hindsight for ya! "The Flitcraft Parable" starts on the cover. I always consider the cover part of the story. It works to set a mood and generate the first spark of storytelling magic for the reader.
The cover portrait illustration of Hammett was done twice. Like any good Op, Hammett had more than one face. The first likeness I did had much more personal influence on it. I was calling heavily on the fact that Hammett was a private detective. It was a moody, stern-jawed likeness, that evoked him, but didn't look like him. Since the lead article was about Hammett, and more revealing, I thought it would work better to see him how he was. His face had a softness to it that was hidden amongst smooth flat planes that denied detail. The classic photo of him getting of a train shows that, his face is a group of stark black and white planes beneath a wide hat brim. The map came late from the article's writer, Michael Sullivan. It's a map of Tacoma, made during the time that Hammett lived here, showing some of his favorite places. I think it was drawn by Hammett. My initial likeness lived on as the face of Flitcraft himself in my adaption, adding another subtext.
A bit about the layout. I may go into this more with the other posts. But, for Flitcraft I kept it simple. My reason being the audience was not made up of comic book fans, but of non comic book readers. I think the difference is that regular readers have a small set of expectations about comics that they are willing to have broken and expanded upon. Most often it's because a regular reader doesn't expect much from a comic book, the bar is set pretty low. Interestingly enough they seem quite open to different styles of art. Comic Book readers are more sophisticated about comics and what they can do. They expect more, but also seem to hold the comic book to, at times, a more rigid standard of what constitutes a "comic book". I remember a quote from an illustration text book ("Illustration Today" by Robert Ross) that goes something like, " A successful illustrator is one who thinks his way into the minds of individuals." Blah, blah blah. So to illustrate for the regular reader, think like the regular reader. I used an old paper texture to evoke the period. The same with the coloring, which springs from old Readers Digest illustrations. They were often black line work with a couple of process colors roughly cut or drawn. Not quite the same time period, but cheap printing plus cheap paper equals 100% Pulp! 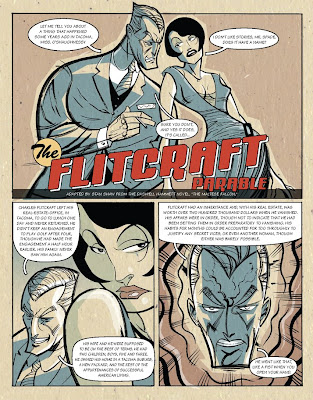 Page one, and right from the start I get to draw Spade and Brigid! Even though there's not a lot of movement, I spent a lot of time on the characters, poses and type to set the mood quickly since I didn't have very many pages. Brigid is based on a photo of a secretary that Hammett was supposed to have had an affair with, and may have based the novel version of Brigid on. The clothes are authentic, from a vintage Sear's catalog. In the first panel I had a lot to establish quickly. I did a few passes at this page, but it was the wonderfully freeing advice of the editor to change things if I had to, that put me on the right path! In the novel Spade and Brigid are not staged this way. I made the leap to position them in a sexually playful way, that's a bit antagonistic. It also made a nice pyramid structure that helped the type. The type is a modern font that echos an older style, the way I hope the art does. I had the help of a wonderful designer Colleen Gray (the "In House Art Director") and the input of my good friend designer Jesse Reyes.
I gave the word balloons a squared off tail to make them different from American comics and something a bit special. The tails are like some of my favorite European comics. I figured the audience would be open to that. The last two panels immediately take us into the first level of flashback. 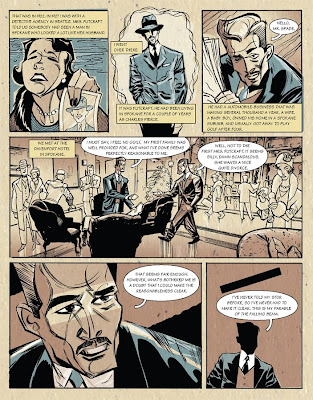 More authenticity on the second page with housewife style dress and the Davenport Hotel in Spokane. The hotel had been remodeled recently and their website is full of great images of the lobby and front desk. Here I used my original take on Hammett as the character design for Flitcraft. The second panel shot of Flitcraft is based on a photo of Hammett. The visual theme of the "beam" starts in the last two panels. First, I used the beam shape to focus light on Flitcraft's eyes, like in old films. Then I used it to set the light and shadow in the background of the same panel. Again, the beam appears in the last panel as a silhouette, like Flitcraft himself. I was hoping the silhouetting would tie the two together, like fate had. Get the hip waders 'cause it's gettin' deep! 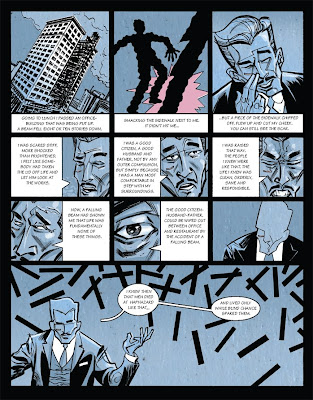 Page three goes into the flashback within a flashback! I took the liberty of having Flitcraft tell his own story. That's the reason for the wonky structure. I stepped into a different color scheme and the art is a much more symbolic and illustrative. Panel one is a bank building (The Washington Building) that was being constructed around the time Hammett was living in Tacoma. If memory serves me, it had the dubious distinction of being part of some big swindle that halted construction and caused a national scandal. It was in the right place at the right time to drop a beam near Flitcraft. Panel two, I thought the beam acted like a bolt of lightning (from God?) so my beam hits the ground bending and crumpling, transforming to a lightning bolt like shape. I gave the bolt and Flit the "jitters" like Horror type. Panels four to eight we see as well as read how his life and thought begin to crowd him, forcing a new direction. Relief come in the expanded ninth panel, his face a clear, blank slate.
Panel ten, all the other possible lives, chances and changes represented by beams. The scar is prominent on this page as a marker for the character, like Johnny Quests hair, a good strong visual cue. 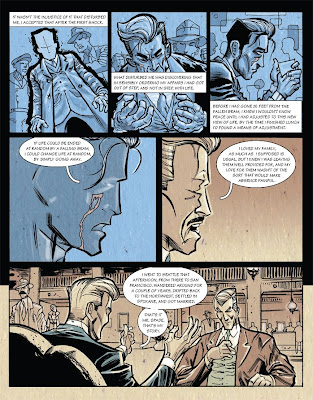 Page four ends the flashback and works to get us back to the story proper. In panel one I wanted to show how Flitcraft was shaken and separate from his fellows on the street. I showed this with a thick rough key line around his figure. Somewhat like the blank slate he think he could become, his face is basic and stripped bare. In panel two he talks about ordering his life. Somehow that made me think that all he had done and accomplished was by the hard work of his hands, in a metaphorical way. So I separated him (his face) from his hands. The narrative box also is the middle in the three panel descent, so that in panel three, when things are calmer, the narrative box is at the bottom of the panel, creating a nice progression that really connects all three. Panels 4 and 5 work to bring us back to the first level by a shift in color, and the change of Flitcraft and the identifying scar. Panel 6 we see Flitcraft/Hammett talking to Spade. The angle is on Spade so as to make a smooth transition to… 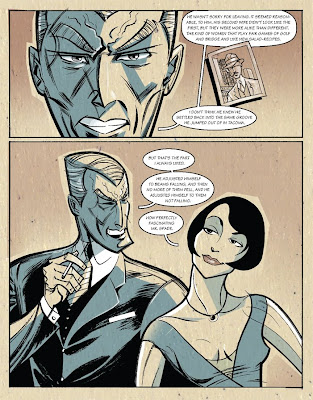 Page five, panel one. A close up of Spade similar to Page one panel three that took us into the flashback. The "photo" of Flitcraft is again taken from the photo of Hammett same as page two, panel two was. About Spade, he is described as looking "rather like a pleasant blonde Satan". I work to get the characters set and stay on model but this last page is the better Spade.
The bottom panel is a nice half page that mirrors the start of the adaptation.
I try to make (at least for now) circular stories, where the beginning and the end echo each other. Here we have Spade and Brigid in a pyramidal composition similar to the first panel of page one. The body language is less aggressive, and adversarial but more playful and cozy. He did tell her a nice story after all.
I like the adaptation. I think of it as "Noir", and as such, I felt for a while I should have used more black shapes and areas to create a darker feel. But now I'm happier with tone that comes across emotionally without the trope of a lot of inky blackness.
NEXT WEEK in Hey Kids, Comics!…911 single page comic for Dark Horse Comics!
Posted by Stan Shaw at 9:14 PM 3 comments: 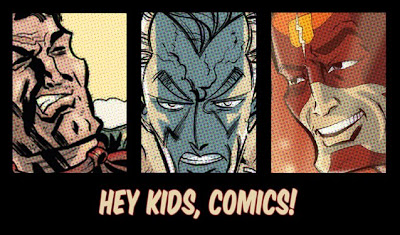 Like a ton of other comic book artists, I put a lot into my work. Some noticed, some not so much. Seldom do I, or any other comic book artist, get to explain in detail what they do. So, over the next three weeks I'll be posting three comic book projects explaining what and why I did things, panel by panel. That is what this blog is about after all, the what and the why.

A five page adaptation of the famous parable of the falling beam from Dashiell Hammett's The Maltese Falcon, "The Flitcraft Parable" for City Arts magazine,

A four page visual liner note for Camper Van Beethoven reunion album, "That Gum You Like" done for No Depression magazine,

A 9-11 page done for Dark Horse Comics. I haven't looked at this in years myself!

An advertising five pager,"BTS Master" for Pullen Advertising, the client was Anritsu.

And a special surprise, the job I got because Mike Richardson, me and my editor at Dark Horse got mixed up, my eight page Western Fairy Tale, "Out in the West"!

Tell all your friends (and a few enemies)

I have been fortunate enough to be able to experiment on just about every comic book project I've done. Maybe posting about these dissimilar experiments will help me better understand what I'm doing and point to some creative experiments for my next comic book work.
Live fast, draw hard.
Posted by Stan Shaw at 3:47 PM No comments: