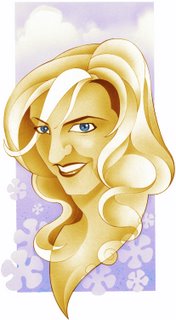 Most of the time, thematically, assignments alternate from serious to humorous, line to color, caricature to conceptual, back and forth, forth and back.

I had been mired in pink and purple for weeks, doing 22 card illustrations for Star Sisterz, a tween-age girls game. I was ready to switch things up, when No Depression Editor, Grant Alden, called with this assignment, an illustration of Lee Ann Womack. Her music is an easy listening style of almost retro 1970 Country that is light and kind of pop, but very well written and produced. Doing the necessary research, I found her to be friendly, courteous and girlish. Just the kind of traits that I had been putting into the illustrations for Star Sisterz. That’s how the peanut butter hit the chocolate.

Peanut butter flava’.
I did the initial concepts, sketches and airbrushed art just as I like to do, in black and white. I kept me eye on getting the right values and a strong composition with a good use of white space for a lighter feeling overall and a higher key value scale. I had just done a Dolly Parton illustration that was similar in feeling but way darker in value scale.

Chocolaty goodness.
Digitally, I stole the colors from my previous assignment, Star Sisterz, and began to build from there. I added a bit of noise in the background while keeping in mind that this had to have a light frothy bright happy pop, kind of 1970s feeling. By the way, whenever I think of 70’s pop image, I see things surrounded by the Mike Douglas Show set, that explains the flowers, which I did use on the tween-age girl game. It’s not pink and purple. I tried to make Lee Ann more of a butter-honey color, with the bright spot of color being her eyes, which are actually that blue!

Illustrators experiment during down time as a way of bringing new things to their next assignment. That’s is cool, but you don’t have to wait for down time. You can bring what you know or have learned from the previous illustration right along into the next, creating a great new tasty piece of eye candy.
Posted by Stan Shaw at 1:28 PM