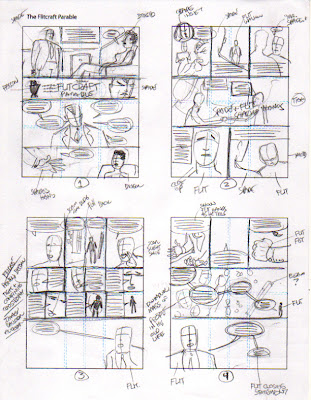 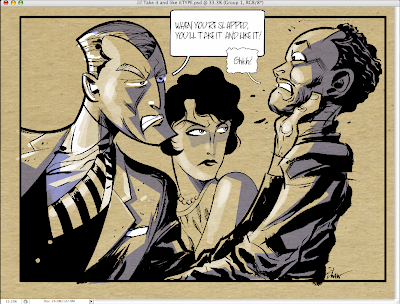 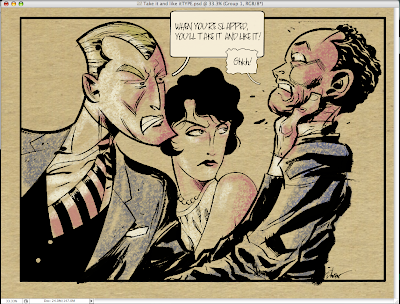 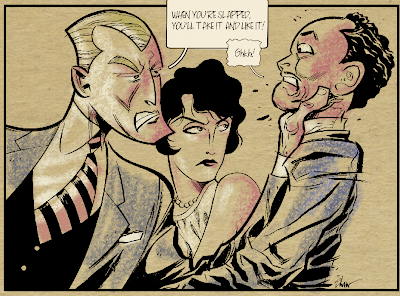 Lets start at the beginning, sort of. The Flicraft Parable is the tale that Sam Spade tells Brigid O'Shaugnessey in "The Maltese falcon" written By Dashiell Hammett. The parable appears in the first part of the Chapter "G on the air" just before Joel Ciaro, Brigid and Spade all meet in Spade's apartment. It's an interesting little tale that appears to have nothing to do with anything, that involves a Charles Fltcraft from Tacoma WA, who vanishes one day on his way to lunch. I won't go into too much about the story other than the more you know about it, Spade and Hammett, the more layers it seems to have. Although the simplest answer is most likely the best.
So, flash forward to a few weeks ago, I was contacted by City Arts magazine to illustrate the parable! Okay, I'll cop (no pun intended) to being a huge Hammett fan, and the fact that we both live/lived in Tacoma is another huge plus. The editor, Jefferey, was more than kind to pay my normal rate and let me expand the tale from 4 pages to 5, plus a cover illustration of Hammett.
So we were of to the races, kind of. My first instinct was to do a slavish adaptation, word for word taking every detail that Hammett put down and drawing that and only that.
Jeffrey, calmly let me know that I may want to really adapt the story. After three wimpy attempts at layouts for the pages, I finally took his advice. Some of the best adaptations are just that, adaptations, taking advantage of what the new medium has to offer and working the story so that you get the basics, the and best. Now I was free! Narration became dialog, Flitcraft became a speaking character, and the sexual…tension between Spade and Brigid became a visual, physical thing. Also the art moved from my wanting it to look old to being new, and having the same tough, noir feel that the book and film have.
My initial layouts sucked!. They gave me a good feel for how the story should break down, but they struck me as uninspired, dull and less than worthy of the story. By un-tethering myself from slavish adaptation, I found ways to express (in the layouts) the tension between the characters and the somewhat surreal nature of a story within a story within a story!
the images above are my tests for art style, inks adjusted and colored in Painter and Photoshop,and my first sucky attempt layouts. Right now I'm changing more narration to dialog and doing more layouts.It's happening fast, I'll do my best to keep the posts coming.
Posted by Stan Shaw at 1:29 PM