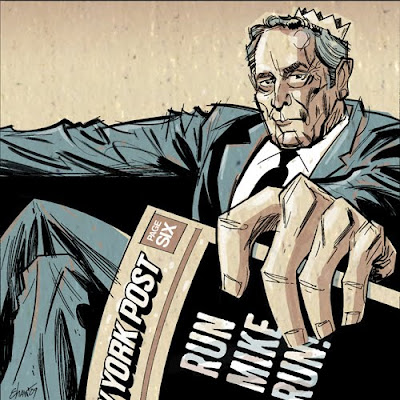 One of my first real gigs I got excited about was illustrating for the Village Voice. I was just little ol' me in Tacoma, doing section covers, spots and feature illustration for one of the hippest, toughest, newsweeklies in the country. I learned to work on New York time. It helped that I was fast and worked well in the morning. I did a lot of stuff, airbrush, line art, all really nice black and white. People moved on, design regimes came and went. I stopped illustrating for them but kept in contact. I like to think I got better and faster (and stronger, like the Six Million Dollar Man) Three weeks ago one of the Voice art directors contacted me. It was Thursday afternoon, they had a column (written by long time political reporter Tom Robbins) that needed an illustration. Sketch by Friday, finish by Monday, end of day… New York time. Well, yeah, I did it!
The first illo was of Mayor Bloomberg, "King Mike". The column was about term limits and a possible meeting with Rupert Murdoch. The Voice liked the way I handled the art on The Flitcraft Parable, and wanted the same look. I took the same file and added the new line work. We went with the image of "King Mike" in repose with a NY Post cover urging him to run. 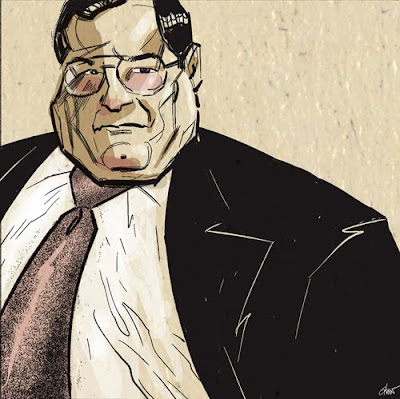 Next illustration was of New York Congressman Nadler, a big, big fella. He was to look friendly, but imposing, not cartoonish or caricatured. There's not much about ACORN in the illustration but they are an important part of the article. We thought subtlety was best.
In contrast to the pre -email days of my first Voice work, these are all done digitally. Sketches and roughs are done in Sketchbook Pro and emailed directly from the app. A very cool feature! The roughs are imported to Painter and inked with brushes I created, then the line art is colored and texture added in Photoshop. Save the whole thing as a jpeg and it's small enough to email!
Man that's fun! 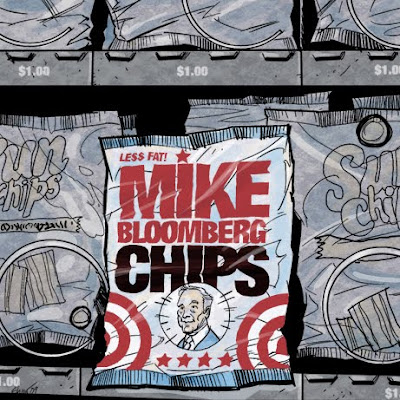 Back to Bloomberg. What took the longest in this image was designing a bag of chips! The design is based on Bloomberg campaign graphics. When I had added the color I thought it was all too much. My "In-House-Art-Director" suggested changing the bag color to white and shifting the type color. Then I knocked back all the other colors and things came into focus. The Illustration had a clear visual priority.
Working on the same Thursday-Monday Schedule (yet to work the weekend on these.) I still did two versions by Monday end of day… New York time.
Posted by Stan Shaw at 7:57 AM