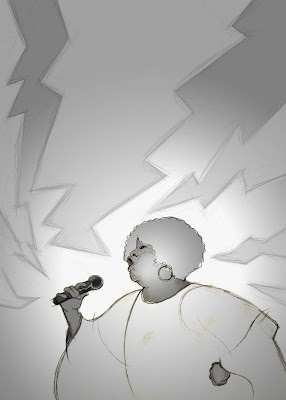 Much time has been spent, lately, doing illustrations that I can't show because of NDA or corporate stuff. What I can show is this, an in progress of Mavis Staples for No Depression Magazine. This is fun, after many months I'm back to the black and white airbrush. Simple and clean, well okay not clean.
The big thing about this piece is that I have given in to the impulse to not do a close up of a singer. The idea I had was more about Mavis in context of what she's singing on her new cd (Gospel and Civil Rights era songs), and how she sings, with much power and emotion. So my idea shows her as a singer and as a conduit of a higher power. A bolt of lightin' from the Lord, or is she exploding with power herself? That's what I wanted to get to. Power, but from which direction, or both? Also, I'm still working through my love of Aaron Douglas.
At this stage (sketched, scanned, and value study done, I'm about to cut frisket today!)the illustration is free of cluttering detail, I'd like to keep it that way. My temptation is to ad bits of line swirling through describing stuff that may be clear enough anyway.

Also today will be concept work on an illustration of Gene Autry. After reading the article there is good reason to not show/refer to him in the Gentleman Cowboy manner.
Posted by Stan Shaw at 12:35 PM

Mavis has always been a powerful vocal, lyrically and emotionally. I happened across this illustration and simply fell in love.

Thanks for the concept, you nailed it !!!