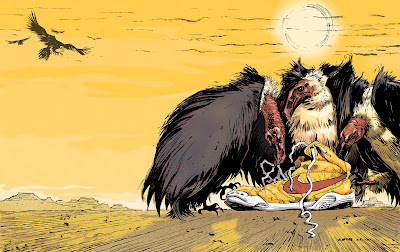 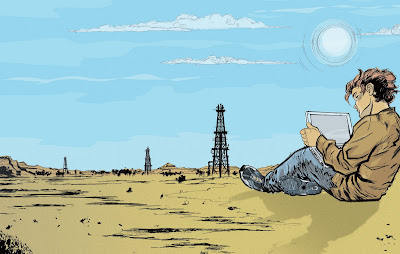 I have forgotten most of the story around the top illustration with the vultures, something about Nike. I do remember it being somewhat of a big deal with Willamette Week (or was that just me?). The art director, Katherine Topaz, threw all her trust in me for an illustration that would be both cover and a two page interior illustration. Later, this was the piece that High Country News saw and liked enough to have Kat get me to do a cover for them. One of the few times my work has been a reference for itself. Kind of fun though, sister illustrations.

With the cover for High Country News I again worked with with Katherine Topaz. She's one of my very favorite art directors and a swell designer. I was fortunate enough to work with her through-out most of her art directorial tenure at Willamette Week. Kat is a blast to work with, lots of fun and a risk taker willing to experiment. She also allows illustrators to have input into the overall design and end use of the illustration, taking advantage of the interplay between AD and Illustrator to great effect. This cover was a last attempt Hail Mary Pass for a tough, dry concept (tax revenue from oil drilling used for government services). The client had seen and liked the vulture cover I'd done for Willamette Week. After doing a butt load of thumbnails with way different concepts, in the end we went with something really close, to the vultures cover, that shared style and composition.
Posted by Stan Shaw at 3:13 PM

These vultures look just fantastic!
Your style breathes pure freedom and energy.
I loved your art in "Sunglasses after dark", composition and storytelling blew my mind those days. Kind of lost track of your work ever since, I must admit. This illos look great!
PS: Sorry for the awful english. By the way, I´m a not-so-young comic artist from Argentina.

Jok,
Thanks for the kind words about the covers. I'm also pleased to hear you liked "Sunglasses After Dark".
I was recently able to re-color two pages for inclusion in a book.

Did you use to color your own work on Sunglasses after dark? didn´t recall that info.
I kept looking for more comics of your own after SAD and only got to pick up a short story for a Verotik anthology book. I really dig your style, a good example of how highly stylized stuff can also transmit drama, horror and erotism. I still remember many panels so vividly!, Really powerful images.
(Sorry for the long comment!)