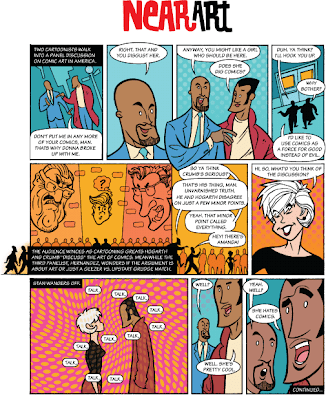 I have decided to post the Near Art comics on my blog. If anyone feels like commenting on then please do. I will also be annotating them a bit. I will however refrain from posting the most current strip until after it has run in City Arts magazine. So this will be sort of like the directors cut! So, "Shall we play a game?"
In NA 1 we meet the main players all three in fact. Amanda, Stan and our Protagonist.
Some of the events in the strip are real, no lie. I do remember a panel discussion hosted by Fantagraphics that featured Robert Crumb, Burne Hogarth, and Jamie Hernandez and possibly Gilbert also. There was a party afterword somewhere. Crumb and Hogarth had very opposing views on dealing with editors and what goes into a comic. It was a lively night.
When I use the term Pop Comic, I use it in the same sense as Pop Music. Light frothy, nothing serious. Clean and well produced. I have a lot of influences in this strip but most obvious may be the Rock Hudson/Doris Day kind of romantic comedies I used to watch on afternoon TV. Man, I hope this strip is funny! Another is Serge Clerc. The colors are at this point very clean and bright, but as I get into the strip I find I want to push the limits I have set for myself in service of the story.
I felt the first strip went by to fast, to condensed. So in the next strip I expanded somewhat, to good effect I hope.
Anyway, read, enjoy and let me know what you think.
Posted by Stan Shaw at 11:56 AM

I saw your comic in City Arts, and I'm glad you posted it on your website too. (thanks for the 'city art' meta-tag) It was good to see some of the early designs. Now that I've got your web info, I'll make sure to check out your other art soon.

Great, check back soon, I will be posting the remaining strips. City Arts has in effect cancelled Near Art. They cut the size by half, pay by two thirds and didn't like the continuity. So that leaves…pretty art! We are in talks to continue something called "Near Art", but not the romance story I was doing.